On January 1st 2012 Mrs Ilona Müller celebrated her 30th anniversary in our pharmacy which opened 34 years ago. During this long time Mrs Müller has witnessed the journey of Philipps-Apotheke with all its highs and lows. 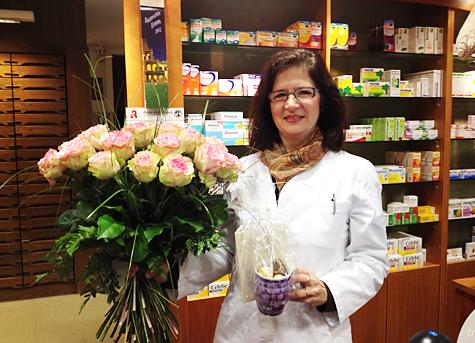 Shortly after completing her pharmacy studies in Marburg, Ilona Müller joined the pharmacy and since then has been known at Philipps-Apotheke as a walking encyclopedia of all things pharmaceutical. If there is a scientific question, Mrs Müller has the answer or is able to find the required information in the shortest time and can explain sometimes very complex issues to customers in a way that is very understandable.
Of course she is also competent in other pharmacy tasks such as the preparation of pharmaceutical formulations. She takes part in regular training and shows great commitment to the pharmacy, her colleagues and our customers.

In her spare time Mrs Müller is very active and enjoys going to the gym and skiing with her husband and son. She also has an equally great passion for travelling to foreign countries. Frau Müller speaks fluent Spanish which means that our Spanish-speaking customers are in good hands.

The entire team at Philipps-Apotheke warmly congratulate Mrs Müller on her service anniversary, with thanks for her exemplary personal commitment. We hope to be able to spend many more years together in Philipps-Apotheke.

Order online and get your order delivered to your home.