History of Philipps Pharmacy in Marburg

Philipps Pharmacy opened up in 1977 in Reitgasse 10 and served the health needs of the Marburg upper town day after day. 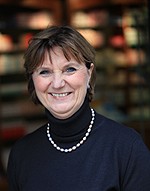 The first owner of the pharmacy was the pharmacist Bärbel Kaufmann (born Blösel).

Frau Kaufmann launched herself into a real adventure. When she made the decision to take on the pharmacy the restoration and reconstruction of the ancient masonry was still fully underway and it took a lot of imagination to picture how a pharmacy with all of its demands on hygiene and space, including the laboratory, formulation and storage areas, could be established.

Even the location of the business was not without risk. There was no doctor's surgery nearby and the upper town lift between Pilgrimstein and Reitgasse was nothing more than an idea of the then Lord Mayor, Dr Hanno Drechsler. Advertising on the façade was of course only possible with the approval of the monument conservation authority.

Philipps Pharmacy was to finally open on the 13th September 1977 but the Pharmacy Council was yet to give its approval. Another week went by waiting for the council to ensure that everything was in good order. So finally on Tuesday 20th September Frau Kaufmann welcomed her first patients and customers into her new pharmacy in the upper town. 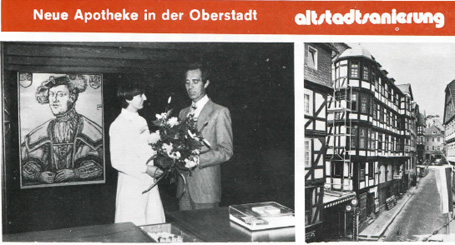 "The restoration has made one of the most outstanding timbered houses on Reitgasse 10 visible again. On the ground floor a pharmacy has been established, an important addition to the upper town. The Lord Mayor Dr Hanno Drechsler had personally campaigned to the district president in Kassel many times for the Town Hall pharmacy, which no longer met spatial regulatory requirements and was threatened by closure, to be kept open until the completion of the new Philipps Pharmacy. The Lord Mayor congratulated the owner, Pharmacist Bärbel Blösel, on the opening of business and wished her a good start." (Press report on the opening of Philipps Pharmacy in 1977)

In the following years came many modifications and expansions within the building, some of which were not entirely by choice. The core of the house, some five hundred years old, caused many a problem. Right from the beginning water was found to be repeatedly leaking in, making it clear that the old building fabric and the new concrete building material didn't always coexist in harmony. Finally cracks appeared in the whole building so that all of the flats in the house had to be compulsorily evicted. Frau Kaufmann and her team simply braved the adverse conditions and Philipps Pharmacy also overcame this adverse time of debris, mud and noise.

In 1992 the last big renovations took place and the pharmacy was brought to its current interior state. The façade to Aulgasse was subsequently renovated and in 2000 the town remodelled the Reitgasse.

Philipps Pharmacy had just celebrated its 33rd Birthday - the opening was on 20th September 1977 - when Bärbel Kaufmann handed over her pharmacy to the married couple Brass.

Doctor Sascha Brass and his wife Dr Nan-Si Brass both studied pharmacy in Marburg so what better than running a pharmacy together in this lovely town? When Bärbel Kaufmann came to her decision to give her pharmacy to younger hands, she won the sympathies of the Brass couple among a multitude of other interested parties.

The harmony and mutual understanding that has determined the relationship between Frau Kaufmann and the Brass couple continued after the sale of the pharmacy. Frau Kaufmann continued to work in her former pharmacy as an employee, to everyone's advantage. She transferred her contacts with nearby doctors to the new owners and the customers continued to see trusted faces and the existing staff also stayed on. Furthermore she showed the married couple Brass the ropes of the wholesale business which she had also been running since the year 2000. It wasn't until February 2015, more than four years after selling the pharmacy, that Frau Kaufmann finally said goodbye (except for calling in for the occasional coffee).

The Brass couple renewed the laboratory and the workroom from scratch and equipped them with the most modern technology. They therefore fulfil the highest quality and hygiene requirements.

Since 2000, in addition to the pharmacy, a wholesale business had been running in the adjoining rooms. This duty was also taken over by the Brass couple and expanded further. .

Since a change in law in 2012 it is no longer permitted to run a pharmaceutical wholesalers in the rooms of and in conjunction with a pharmacy. Any owner of a pharmacy who wants to run a wholesalers has to do this as an independent venture in its own premises.

Order online and get your order delivered to your home.